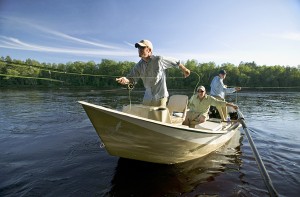 The crew at Tight Lines would like to welcome you to our shop. As Northeastern Wisconsin’s largest fly shop, Tight Lines offers a wealth of knowledge and equipment. The shop contains one of the largest fly tying selections around as well as the largest tackle companies to choose from. Come and try a rod, learn a tying technique or chat with friends over a cup of coffee. We are here to serve your needs by offering years of combined fishing knowledge. Each of us has fallen in love with the grace of fly casting, the delicacy of fly tying, the exhilaration of catching fish and the peace of releasing them. Fly fishing is an art, a timeless traditional sport that allows us to experience the rhythms of nature. We want to share this experience in the hope that you find as much enjoyment in the pursuit as we have. Each of us hopes to meet you on the stream one day. Until then, “Tight Lines to you.” 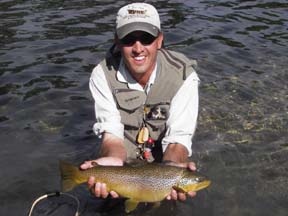 Tim and Sarah met in Big Sky, Montana while Tim was guiding on the fabled Madison, Gallatin & Yellowstone Rivers. A strong believer in “catch and release,” Tim decided to keep that summer’s best “catch” and brought Sarah, an Idaho native and outdoor enthusiast, to Wisconsin. Tim is a dedicated trout fisherman who instinctively knows where to find fish. Tim is a beautiful caster whose passion for the sport shows through in his fishing, tying, teaching and story telling. Tim has been featured on ESPN Outdoors, OLN, Outdoor adventures, Hyde pro-staff member and Hosts Midwest Sportsman. Tim still guides a lot of days and works at the shop.

Sarah was introduced to the sport of fly fishing by Tim while in Montana. Since that time, Tim has found that Sarah loves to trout fish and would drive anywhere in search of beautiful trout water. Once on the stream she often splits her time pursuing fish and taking pictures, always attempting to capture the perfect shot. Sarah looks forward to the winter months when she can be standing on the pointy end of a skiff casting to bonefish. 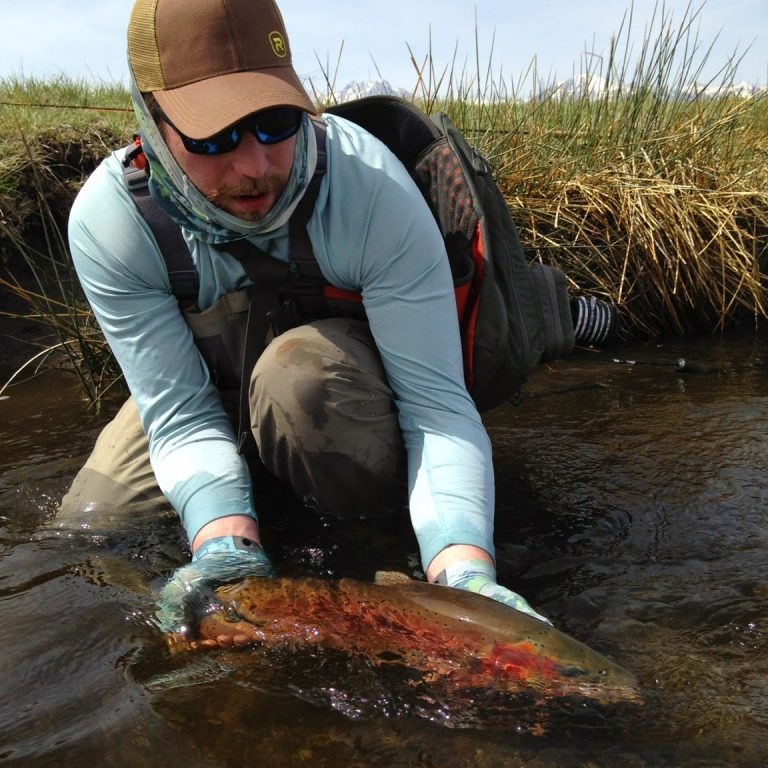 Dave started fly fishing and fly tying in northern Wisconsin around the age of 8 when his grandfather introduced him to fly tying, and proved to him that he didn’t have to dig up all that sod his dad just put down looking for worms to catch bluegill and sunfish. Lashing bits of dog hair and feathers to hooks to trick these indiscriminate feeders quickly became an obsession for him. Shortly after that, Dave started filling a small fly box at a local bait shop to earn enough money for his own fly rod, and to buy the proper tools and materials needed to tie some of the more classic patterns. With the proper materials, and a basic fly tying book, these duck feather and dog fur concoctions quickly evolved into wooly buggers, pheasant tail nymphs, adams, and various types of popper patterns, which greatly expanded the species he could entice with this new found hobby. Around the age of 14, he became obsessed with trout fishing, and would ride his bike to the Hunting River and the Wolf River in search of large brown trout and brook trout. As a young adult, Dave decided he was going to work in the ski industry, and he needed to figure out which western resort he’d go to. Big mountains with an abundance of snow in the winter, feeding beautiful rivers with cool water in the summer was as good as it gets as far as he was concerned. While deciding which ski area he would work at, he saw a picture of the Upper Owens in a magazine, and decided that day, Mammoth Lakes California would be his home for the foreseeable future. Dave enjoyed working hard all winter so he could fish as much as possible during the summer. Eventually though, a friend that worked for the local fly shop, The Troutfitter, talked Dave into taking a job a few days a week at the shop so he could get a discount on the tippet, leader, and fly tying materials he was spending the majority of his money on. The summer after that, he was promoted to shop manager in charge of the retail department, and six months after that he was promoted to general manager, in charge of all day to day operations. That winter he decided he’d work both his graveyard shift snowcat job, as well as his job at the Troutfitter. Working 16 hour days was rough, and after that winter, he decided the next fall he wouldn’t return to his winter job, so he could focus his efforts on his job at The Troutfitter. It was around this same time that Dave became friends with an absolute legendary fly fisherman, author, former owner of the June Lake Fly Shop, and Sierra Custom Rods, Rob Hudson. Dave had just wrapped his first fly rod, and was eager to show Rob this functional, but extremely ugly stick. Through Robs guidance and patience with a barrage of questions, Dave started wrapping some really beautiful fly rods. It didn’t take long before friends started asking Dave to wrap rods for them. Rob gave Dave all of the tools he needed to start a business wrapping fly rods, and even let him take over Sierra Custom Rods name. Since that time, Dave has wrapped hundreds of fly rods, both single and two-handed, and even a casting rod! Several years later, a fly shop in northern California The Fly Shop, called Dave and offered him a job as their retail manager, with promises of traveling the world fishing for any species he could imagine. It was a difficult decision but Dave eventually decided to take this job. While in northern California however, he rediscovered his love for warm water species, and spent much more time fishing for bass and carp than he did fishing for steelhead and trout. He became the go-to guy for musky, pike, and carp at the shop. After three years at The Fly Shop a friend sent Dave a message with a photo from Tight Lines Fly Shop saying they were looking for a manager, the message just said “know anyone who like musky fishing?”. After speaking with Tim, Dave knew this was the opportunity he’s been waiting for to work for a great company, fish for his favorite species, and be closer to family.